You Ain’t Got No Alibi ~

Went to the “Alibi Room” on a Wednesday at 7pm, we made reservations anyways. Good thing too, as there were people waiting as we entered and at least a group by the entrance throughout the night.

It is located at the outer edges of Gas Town and is considered a “hidden gem” just by the location alone. The outside of the restaurant does not try to attract attention with a sandwich board, a neon lit-up sign or even a coloured awning. Instead it just relies on its reputation and word of mouth referrals.
It’s nice to see front of building meter parking in Gas Town. Although with only 4 spots available you are better of taxi-ing and being able to drink as much as you want and to try all the local craft beers Alibi has to offer.
Upon entry you notice the décor is very “industrial”:  Brick walls, large ceiling to floor windows and cast iron fencing in front of them. Even the art work matched this theme; back lit images of gears and oil rigs hung on walls.
Walking to the table you notice a train pass by outside, but you cannot hear it as it is even louder inside. All tables available tables on both floors filled with bodies drinking. Seating is maximized with a bar set up against the stair railings.
We were seated at one of the long share tables. One of my guests suggested they should turn up the music because it sounded like a cafeteria. Sitting at this table sure made it feel that way. Though, I felt if the music was any louder it would just add to the background chatter that you had to tune out in order to be engaged in any conversation. 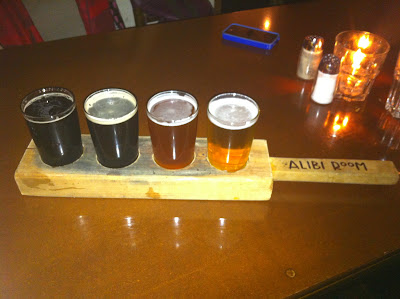 The “Alibi Room” had a menu that listed over 40 beers: IPAs, stouts, ciders, lagers, porters, etc. These were all available in a variety of sizes: 6oz, 10oz, 16oz, 14.5oz, 20oz; all to accommodate any drinker’s needs or preference in glassware. We got 3 rounds of the 4 taste samplers at $12 each, $3 per 6oz glass. They were served on “frat bats”, long wooden boards with a handle and slots free for 4 glasses.
Beers that had an expiry date: a countdown to when you could last order them jumped at me as being the most desirable to try. There were also options for beers that would be served once another ran out. I like my beer dark, the stronger the better, I feel I get a better value for my buzz. One of my guests likes the lighter options that are closer to “regular” brews like “Bud Light”. And the other guest, love the fruity notes of IPAs. Together we were able to drink and discuss the intensity of the “Thor’s Hammer”. And the smooth texture of the creamy “chocolate stout”. We tried 13 different varieties of beers, all with amusing names like, “Back Hand of God”, “Sticke Dark”, and “Creepy Uncle Dunkel”. This may not for the weak of heart as one of my guests finished her rounds with sparkling wine.
If you are like trying tasters of different artesian beers Alibi is for you. All their beers are local brewed and their selections are updated regularly. With no two beers the same you could easily make a night of trying each with a large group of friends. 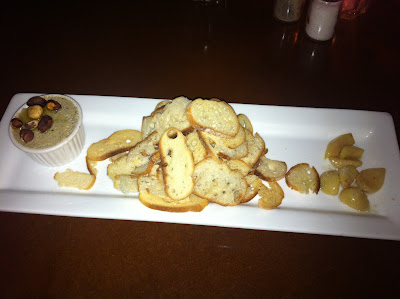 Maybe it was the beers or that we were hungry, but everything we ordered we loved. We had a broccoli and mushroom pâté served with a side of crostini and roasted garlic. The pâté had a smooth velvety texture and easily spread, its taste was so flavourful and rich I could not believe that it was vegetarian. 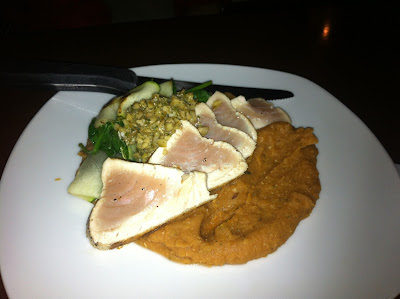 The great part about dining with other women is that everyone enjoys share their plate, and you get to try a bit of everything. I made sure to try the seared albacore tuna first, knowing its light fresh taste would have been hidden after a bite of anything else. The tuna was accompanied by a green olive tapenade, thinly sliced zucchini and a red lentil puree. The flavours melded well together and it reminded you of biting into a cool breeze. What a fitting dish for the first day of spring. 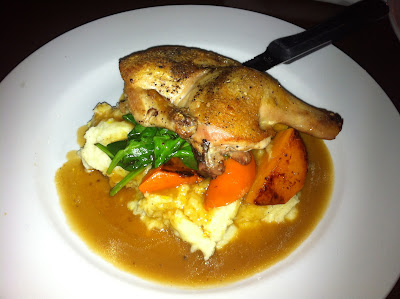 The 1/2 roasted game hen came with a side of buttery leek mashed potato, and roasted carrots and squash, all coated generously with ale gravy. The chicken was moist white meat. The potato was made special with the extra pop that the leek gave. And the vegetables were soft and almost melted in your mouth. It was a great dish but in comparison to the fish and pork it really fell short. It just only felt normal. 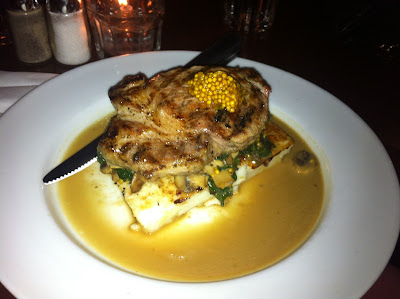 The grilled pork Loin was juicy with the right amount of salty fat in every bite. It went really well with the cheddar-bacon grits; I have never had grits made into such a texture that it felt like we were eating scalloped potatoes. This was then topped with spinach and creamy mushrooms with an apple mustard. 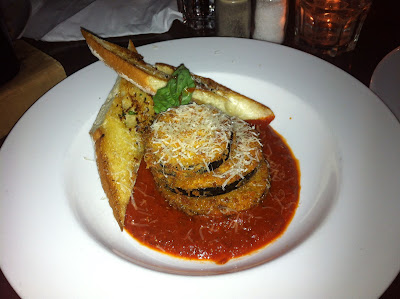 The dinner special was deep fried eggplant stuffed with mozzarella, over marinara sauce. The eggplant tasted like bread battered mozzarella sticks with a nice crispy crust. They were amazing right when they hit the table: Hot. And much better without any sauce, which only took away from its subtle taste. But the garlic bread and marinara sauces sang together.

There was only one dessert option and by its description we had to have it. A trio of: a flourless chocolate lava cake; espresso ice cream over salted caramel crumble; and poached pear over piña colada mousse with mint. We even got beers to match these.  They were like each dish before it, amazing. Everything had such a unique spin on the orginal, which made them memorable. It was all so good that I actually forgot to take a picture before I dug in.

Would I go back? – Yes! The drinks were original with no two alike. And the food on point, there was not one thing we didn’t like. And this was all made better thanks to great staff with big personalities and helpful smiles
Would I recommend it? – Yes! For those who have never been it is definitely a must try hidden gem.  Alibi is great way to do the beers tasting thing without having to accumulate all the beers yourself.