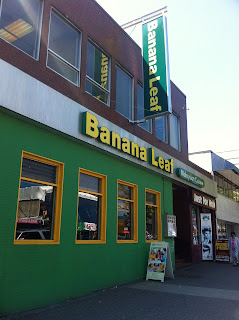 It has been a while since I last visited “Banana Leaf”. I remembered not being impressed over dinner, however today’s lunch turned that all around.
You can’t miss the place driving down West Broadway, a bold green building with bright yellow text. Inside, the restaurant is jammed packed with authenticity. From wooden statutes that faintly resemble humans and giant fanned out fans, to neatly stacked spice racks and etched on voluptuous urns. I liked the Thai paper puppets and the symbols of prosperity that hung off walls. Mix all this with framed art work, tropical music, and servers wearing traditional patterned aprons; you got yourselves quite the theme here.
It was busy on a Thursday for lunch. We came at a little past 12pm, and avoided waiting with the other hungry guests. Those who had to stand in the foyer without reservations, that came after us.

Already enjoying the atmosphere I was now ready to enjoy the food. I was overwhelmed with options that I knew I would like. If you have read any of my former Malay cuisine posts you know that this is the food I was raised on in Brunei, and that I will have to order the laksa.
There were lunch time sizes of the classics. Smaller plates at a couple of dollars less than that of dinner. A flip album containing coloured pictures of customer’s favourite sat on each table. They allowed you to see the top 10 menu items before you order it. There were also seasonal entrees like a wild halibut and lychee curry or pineapple duck. I fought my urge to try these and decided to instead focus on a sure thing.

I appreciated that the menu not only detailed what was in each dish, but also divulged facts pertaining to its origin or popularity. I was informed that the appetizer platter was perfect for two, the red curry was made authentic with Malaysian curry spice, and that what I wanted to order was a great choice. One dish was one of the greatest culinary contributions that India has provided to Malaysia, the other a signature Malaysian dish, and another a Malaysian classic. Looks like I only like the “grilled cheese” of the Malaysian cuisine world. I only like what is the most common, and have never taken the time to discover any other. I wish they had share platters so I could try more without the commitment of having to finish a full portion. 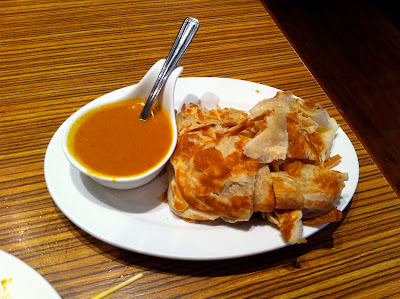 “Roti Canai”, you can never go wrong with this delicious appetizer. It is a flakey layered bread served with a coconut curry sauce. Anyone who likes curry is sure to like this sweeter version, served with with bread for easy dipping. They are the perfect pairing. Unseen before is the generous ness of the portion of roti. I actually had enough bread for the amount of sauce provided. This is one if the greatest culinary contributions that India has provided to Malaysia. 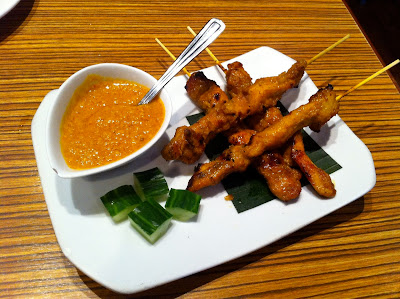 “Satay skewers” are another popular appetizer, and an Malaysian signature dish. Available in marinated lamb, chicken, beef, or pork. We had the chicken, with a minimum order of four for $7. The price is a little high for meat on a stick. However it is $1.75 per stick and $2.50 is the standard night market price. I mostly wanted this for their spicy homemade peanut dip. The chicken was tender and the sauce silky sans the crushed peanuts. The sauce is sweet and spicy, creamy and crunchy, and everything I want in a meat dipping condiment. It was another successful taste pairing since roti and curry. 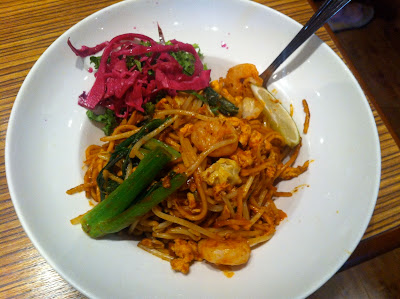 “Mee Goreng”, fried egg noodles with beef, shrimp, tomato, egg, bean sprouts, choy sum, and tofu. It was most spicy on first bite, and had a warming after burn down your throat. A lot spicer that pad Thai, but with double the flavour. I liked the tomato based sauce that provided some sweetness to an otherwise spicy plate. This is an Malaysian classic. 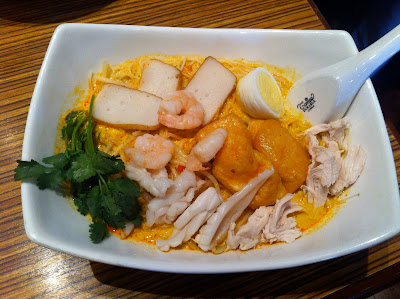 It was hot outside, but boy howdy I was going to have my “Singapore Laksa”. Coconut soup with rice noodles, seasoned with dried shrimp, chili, garlic, lemon grass, and turmeric. And served with bean sprouts, cilantro, egg, chicken, shrimp, fish cake, and squid. With a burning hot soup and spicy hot seasonings, I was thankful for the chilling power of their air conditioner. As I knew it would be, it was delicious, I never had a laksa I didn’t like. This version was a lot more creamer with an increased use of coconut milk. You could tell by the pale orange broth the rice noodles were absorbing. It tasted a bit like the sauce for cream lobster you get a Chinese restaurant, but with more of a spicy kick. I am use to just getting chicken with my Laska. So with the addition of all the other seafood I was ecstatic. But was missing the raw tomato slices and cucumber chunks that I am use to getting, they provided the only crunch in an otherwise soft dish. Even though I was full I was attempting to not let any of it go to waste. Laksa doesn’t fare well as leftovers, as the noodles and vegetables become soggy from soup and you don’t get that great broth to slurp. 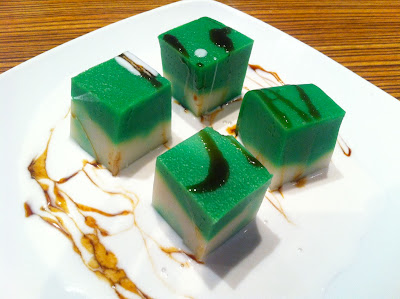 “Kuih Talam”, a traditional two layered Malay coconut tray cake. Made with coconut milk, rice flour, green bean flour, and pandan leaf. I have not often seen his not so sweet dessert available on a menu. So ordered it for nostalgia. In our family we refer to it as “guai” (I don’t actually know how to spell it). It is chewy and jiggly, like a more structured jello. Other varieties have rainbow layers that you can peel off by colour. This version came with sweetened sticky rice that was further soften from sitting in a pool of coconut milk. Each bite was exactly as how I had remembered. Pandan is an acquired taste that I cannot describe. I suggest trying this dessert at least once to quell any curiosity. Most trying it for the first time find it neither good nor bad, just there.

Our server was attentive but had difficulty offering suggestions and giving me her take on the food. She spoke with hesitation and seemed to want validation in her responses.


Would I go back? – Yes. After my last visit over 7 months ago, my answer would have been a no. But today my mind has come around. The food was delicious and served by attentive staff in a well lit and well received setting. I would love to come back to try their cocktails, like their lychee mojito. North American drinks with south East Asian ingredients. Yum.
Would I recommend it? – Yes, but I am a little biased, I love all Malaysian food. But as far as Malaysian restaurants goes this is the best that I have been to for selection. With a 5 page menu they cover all meats, seafoods, noodles, rices, drinks and desserts. Dishes I have not seen anywhere out of Malaysia are on this menu, so I can safely conclude that they have authenticity on their side too. Don’t deny your cravings.