March 14th was Steak and blow job day. You are thinking does this actually exist? Well Frenchy saw this posting on Facebook and it was good enough to convince him that this was an event that we as a couple should celebrate. Apparently this day is meant to be the male equivalent of Valentines Day. Well I am easy, so I was sold. Any reason to have a fancy dinner and dress up is good for me. I knew where ever I took him, steaks had to be involved. The question was where boasted great steaks that was worthy of being eaten on such a prestigious day? We rolled the dice with “Black and Blue”. 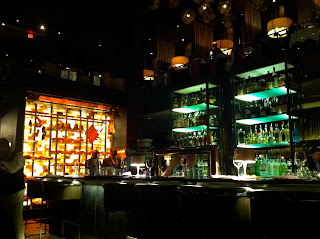 “Black and Blue” is part of the Glowbal group and is housed beside its sister restaurant, “Coast”. It was a rainy night and I refused to allow Frenchy to pay the $12 for valet parking, so we had to find meter parking a block away. When we entered the threshold I was surprised that the hostesdid not help us with the heavy door. I mean if they do it at Catcus Club… Instead she stood still and very deadpan behind her desk. Not the friendliest first point of contact.
We were seated in individual loungers under an open ceiling that was railed and lined with tables of two. The bar was a center island and behind it stood this clear giant fridge. In it hung beautiful cuts of meat, some in bone and others marbled perfectly. We were hoping to be able to pick out our own cuts out of the fridge to be prepared for us. But in actuality it was more a decorative feature; and it was doing that wonderfully. 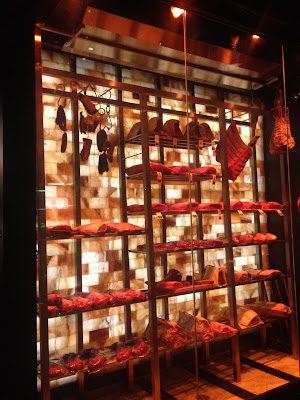 We started our night with a bottle of “Wildcard, Peter Lehmann” red wine, by the bottle. I have always heard you have to have red wine when eating red meat. I was a little surprised that they did not have complimentary bread served before your meal. But I guess food is always better when you are a little hungrier. You don’t want to ruin your appetite with bread as a filler. The menu listed numerous dishes we wanted to try, but in the end we both had beef tenderloin. My tenderloin was done up in a “surf and turf” and Frenchy had his as an 8oz steak with a side of onion rings and loaded baked potato. 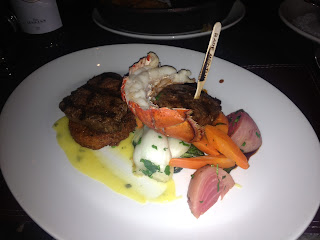 I choose the “surf and surf” because it was made as a meal, I did not have to pick my own sides. There were carrots, baby bok choy, and radishes. The potato cake was the best, it was buttery and rich and felt like the fanciest hash browns I have ever had. They looked as good as they tasted too, with flecks of green onion showing through the crispy golden brown crust.
My disappointed came with only getting half a lobster tail alongside my tenderloin medallions. I wondered who got my other half? Frenchy defended this by saying I should not have ordered seafood at a steakhouse. But “surf and turf” is a common staple at any steak house and for $44 why can’t I expect a full tail? Well, what little I had of it was amazing. It didn’t need to be accompanied by butter, as the flavour was infused into every moist, sweet bite.
We both had our steaks medium rare and each one was a perfect pink. You poked your fork into the centre and the meat would buckle. You could tell this was a high quality cut of meat and therefore would be soft with just the right amount of chewy. Each bite was exciting you did not get tired of the taste. We both concluded that this was the best steak we have ever had and worth every penny. 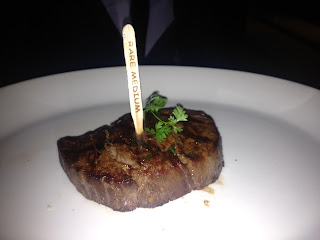 Our sides were delicious as well, but really nothing to boast about when compared to our tenderloin cuts. I am not
fan of onion rings, but I did try one, I loved the taste and crunch of the batter, but cannot get over the slimy onion texture. This one was not for me. The baked potato tasted as if it was whipped smooth and then had chunks of potato added in afterwards, this gave you a great chewy, mixed combination. It’s only flaw was that there was a little too much sour cream mixed into it. It should of been put on the side as an option, along with the horseradish, BBQ sauce and wasabi. All the above were interesting choices for condiments that were tasted, but not used with our potato. 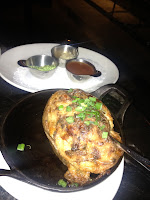 In between our bites it was hard to have a conversation. Our chairs were regal, but hard to move in order to get close enough to be heard by one another. I also sunk into mine several times, even with the back and butt pillow. At the conclusion of our night we did end up moving them side by side.
We would absolutely go back and absolutely recommend it to others. If you have the money and like great food in moderate portions, all in a stunning setting that would make any one feel like a boss: this is your place. The attention to luxury in their decor is excellent; wine fridges on the wall, a stunning display of beautiful liquors beside you as you walk up stairs, and a central lighting piece that makes for a great conversation starter. To quote “Guru Cooking Inc.” (www.gurucooking.ca), “These are the only guys in the city that know what they are doing!”. He told me that they do a lot of research before they open’Black and Blue” and that the owner strives for exceptional customer service. The guru had a few great stories to share. Though I would disagree after my first visit.
Next time around we will sit on the upper floor looking down the balcony and order the $135, 60oz highly graded “Tomahawk” steak. “Using only USDA prime, the Double RR Ranch is the top producer in the Pacific Northwest. The cattle are hand- sorted and graded to the highest standard. Steaks are shipped to a limited number of chefs around the world making this one of the world’s most exclusive products. ” If you went in a group of 5 it would come out to $27 per head, 12oz steaks each. A 12oz steak is still a huge slab of meat, most people order 8oz and are satisfied.
In short please go here and enjoy yourself!
And as for the second part of the night I will only add this quote I remembered from somewhere and thought was accurate: “A blow job is work, they call it a “job” for a reason, it is not blow vacation”.