Back for more of the cuisine I love: Malaysian. This time we were trying the more recently opened “Kaya Bistro” on Broadway, only blocks away from its competition “Banana Leaf” (http://www.vieamaggi.com.previewdns.com/2013/07/banana-leaf-malaysian-restaurant.html). Seeing as I came here with the same guest that I dined with there, a lot of our dining was a comparison of the two. Heading out early on a Friday gave us easy opportunity to find metered parking right out in front. It also allowed us to be one of the few through the doors first. “Kaya” opens at at 11:30am, but by 11:25am people were already at the door pulling to see if it was indeed open. I mean the staff were still cleaning, windows still needed to be scrubbed down, and the floors still needed to be swept. Taking our time and going in at 11:35am we were already the 4th table being seated. Quickly after us, within minutes the restaurant was 3/4 full. Take out orders waiting at the bar, large groups stopping in for lunch, and couples wanting to try something new. All this traffic while one of the poor girls was still trying to sweep, eventually she gave up and just put away her broom and dust pan. The dirt on the floors could wait, her customers were hungry. Yes they were unprepared for opening, but they recovered well by prioritizing their guests over tasks. It was a little annoying that everyone was seated in the same section and only within inches of each other, as the tables were packed tight. But in their defense you are seated by section for the convince of your servers, and at this time there were only two. Later when the restaurant got even busier the back of house staff were enlisted to help usher hot dishes to tables. And even then more bodies kept coming in. This gave us a feeling of reassurance in our choosing of a good place to eat. We later inquired about the popularity of the place today. One of our servers mentioned there was a recent promotion advertised, hence the extra crowd. This is a very traditional Asian thing to do, instead of taking the compliment and success, she found another reason for it. This action is meant to show humility, a very prized Asian trait. But in this case she would have been better off proudly justify the crowds to “Kaya’s” great food and even better service. This would have been a stronger case for repeat business. 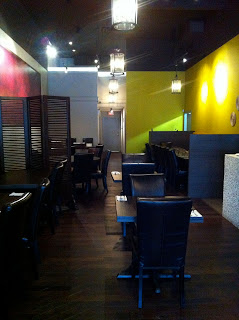 The restaurant was plain, no traditional pictures or detailed objects. Just a painted room, to really allow the brightness and colour of the food speak for itself, especially when set on one of their wooden tables. One wall was yellow, its adjacent fuchsia. A good back drop to set their bar against. The main dining room walls
were white with a large red mural that stretched its length. On it were hibiscus flowers done in tone on tone red. They gave off a tropical out doorsy feel, along with the street lamps strung up along the ceiling.
The menu included the usual categories; food separated by tapas, soups, noodles, rice, meat, vegetables and seafood. What was new was their set menus. An 8 course tasting for 2. And a set course for 10. Both great ways to allow those new to the cuisine to try a bit of everything, and to take the worry out of choosing what goes well with what.

We ordered as much as we could off the lunch menu, an additional page clipped onto a board, separated by rice and noodles. They were the same dishes found in the full menu, but a dollar less for lunch time sizing. The food came surprisingly quick. Maybe what we had ordered were the most popular items, pre-prepped?Either way it was a string of 6 dishes, one after another that headed our way. The servers felt as authentic as the food tasted. One woman, who I am sure is the manager, really took the time to ensure that we like the food. She spoke with sincerity as she gauged our expressions. 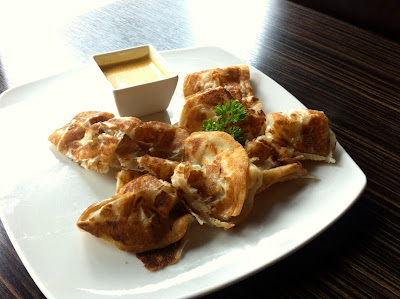 “Roti Canai”. Hand rolled layered flat bread with curry sauce. This order was considered two pieces, which we found to be very generous. The roti bread is also available in a whole wheat version, we stuck with the traditional. If you are going to order deep fried bread saturated in oil and butter I don’t really think you care about which flour is being used: whole wheat or white. Though it is a nice option to have available. I just can’t imagine the dough coming out as light and perfectly fried as we had it with the regular. The curry sauce however could have used more spice. It had a unique sweetness to it, which was enhanced by its aromatic spices. The curry to bread ratio was perfect, there was no need to go stingy on the dipping and there was still enough for each piece. And the presentation was just great, one little leaf of parsley did wonders to add colour and contrast to an otherwise very yellow dish. Sometimes it doesn’t take much because you don’t need much. 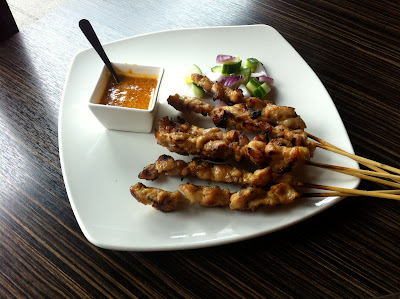 “Satay” skewers in chicken. Charcoal marinated skewers with a spicy peanut dip. The presentation once again was lovely. With cute dipping bowls and chopped up cucumber and red onion cubes that not only gave the dish colour, but made a great edible addition to the meat as well. The chicken was tender and well seasoned, so well that it really didnt need any aid from the peanut sauce. But I love satay peanut sauce and indulged by eating spoonfuls straight up. 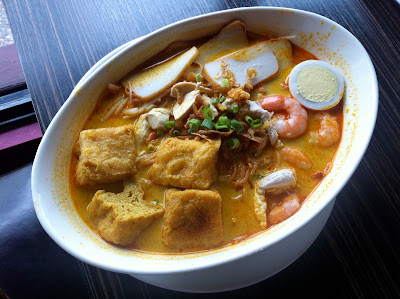 “Singapore Laksa”. I had to order my favourite, this popular spicy noodle soup is made in a rich coconut broth with tiger prawns, chicken, bean sprouts, egg, and fish cake. This is one of the better presented bowls of laksa I have ever seen, though unfortunately not one of the better tasting. I found even the first bite to be too salty. There was a constant search of the listed ingredients, not enough everything and an over whelming amount of vermicelli. I could have used more bean sprouts to add some crunch to an otherwise mushy dish. None the less, I have never turned a bowl of laksa down and finished it with gusto. 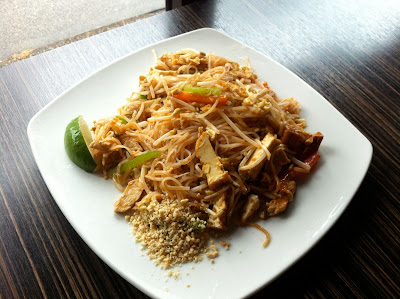 “Pad Thai”. Thai stir fried rice noodles with shrimp, tofu and vegetable, with crushed peanuts. Having the peanuts to the side was appreciated. Giving those not wanting any, but forgetting to say so, a way to opt out last minute. The noodles were only okay. It didn’t taste any different for all the others like it, nor did it evoke any desire in us to have more. The noodles did feel a lot lighter with less oil being used, though it also tasted a lot drier. 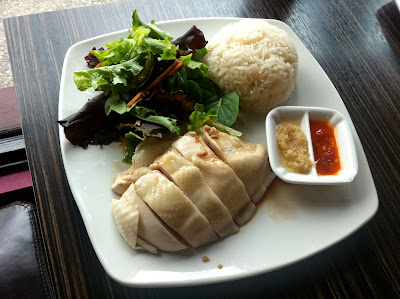 “Hainanese Chicken”. Steamed boneless chicken, chilled skin-on. Served with peanuts, ginger, chili, and a garlic spicy sauce. This is another of my favourite go to dishes, one I don’t get often, that is hard to find just right. But at “Kaya”, they got it right. It is hard to describe, this is a dish I grew up eating and only know it as “the right way”. This was a delicious saltiness. You tasted the chicken, and enjoyed the moistest breast meat I have ever had. The sauce is a sweeter soy, that gets better when the garlic ginger sauce is added to the mix. The color is off putting, and it almost looks like the chicken is not cooked, but if you can get past this, I assure you it is quite the treat. 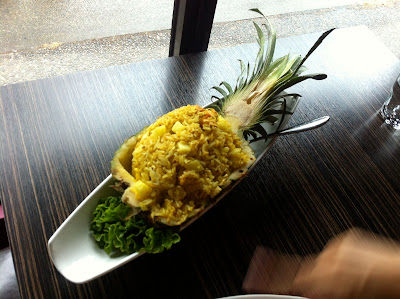 “Seafood fried rice in a pineapple boat”. Fried rice with mixed seafood, egg, raisin, and sunflower seeds. We got ours minus the seafood and with the addition of chicken. The request was easily accepted, they were willing to make substitutions to please their customers. It also showed that the food was done scratch, as ordered. When ever I see pineapple rice, I can’t help wonder if the pineapple “bowl” has been reused as a dish in pervious orders. In this case, based on the amount of meat still left on the fruit’s skin, I am lead to believe that the fruit in our rice came from the very same pineapple. The purpose is so that you can scoop out more pineapple flesh, as needed for your rice. You don’t often see fried rice with dried fruits or nuts, this is a very South East Asian thing. The raisin makes the rice sweeter and the nuts, or in this case seeds give it some texture. The rice was light and not saturated in grease. You got a lot of curry powder, a flavour that married well with the sweetness from the pineapple. Though as a result, the rice came out as a florescent yellow, and as bright as the pineapple meat. It as almost a little off putting.

With all that we had coming the manager asked if we had a third member joining us, to help two girls finish 6 plates. She teasing asked how is it that we stay so thin. I explained as I asked for 4 containers to pack up more than half to go. We ordered the most transitional and basics of Malaysian cuisine. The same dishes that everyone else usually orders. But what better way to judge a restaurant than through its top 10. I have also tried all these dishes at other restaurants and it has helped me conclude that it is one of the better Malaysian restaurants. Better than “Tropika” (http://www.vieamaggi.com.previewdns.com/2013/07/tropika-malaysian-thai-cuisine.html). Not as good as “Banana Leaf” (http://www.vieamaggi.com.previewdns.com/2013/07/banana-leaf-malaysian-restaurant.html) on a good day. The main difference between. “Kaya” and “Banana Leaf” is their branding. “Banan Leaf” attempts to broaden their reach with a multicultural staff to serve their customers and multicultural models to advertise their restaurants. Where as most of “Kaya’s” employees were very well versed in Malaysian food, being born into the ethnicity. Me being well versed in their accents, helped to pick up on it.


Would I come back? – Yes. The presentation of each plate was stunning. Time was taken to decorate, it was not just slopping food on to a plate. The quality was on par with the quantity, and at a price I appreciated. Not often do you get the trifecta in Asian cuisine. Good quality ingredients, large portions, with nothing over $13. You can’t even get a good fast food burger combo at that price.
Would I recommend it? – Yes. If anyone is looking for a good Malaysian restaurant to try, that isn’t the usual suspects, you won’t be disappointed here. Updated specials and unique combos, served by an authentic staff. Don’t deny your cravings.