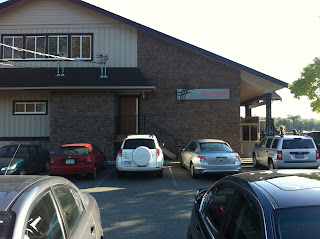 Enroute to the Mission raceway we wanted dinner. We kept our eyes open for a new place, a hidden gem that didn’t look too run down in a small town. We knew “Kingfisher” was our stop when we drove by its lot, filled with cars inside and out front. This looked to be the only building seeing business at 6pm on a Friday night. A lone pub slash restaurant in a row of empty factories and industrial facilities. Yes it was busy now, but I can only imagine how busy it got during happy hour. After shift for many hard working men and women, who toiled in the factories now closed for the day.

That aside, we had to stop. Clearly the locals knew something about this place that we had to find out. Pulling in we it was a race to find a parking spot. To your right there were rusted containers, your left a chained and gated off field, behind you the empty road ahead, and before you a old restaurant fronting a fantastic view of the Pitt River and setting sun. 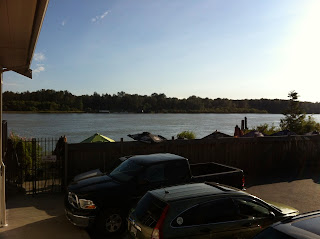 Seeing the crowd get out of their cars I was expecting to be the only Asian girl in the joint; only to open the door and pass the stone waterfall feature, to see standing behind the hostess podium, a young Asian girl, no older than 14. I could see the same surprise in her eyes that were probably in mine. She stood with another 14 year old East Indian girl. Yes this was a pub and bar but as hostesses they came no where near the alcoholic beverages. We Vancouverites must speak very differently than that of Maple Ridge locals. After a series of “huh’s” and “pardon me’s” we decided to not wait for a beautiful patio seat, and instead grabbed a no-wait seat inside. This place was as busy as Maple Ridge was going to get on a Friday night. An hour plus wait for the patio and a quarter of the seats reserved. We settled on the bar, not liking our closely spaced booth options. Here our neighbours were friendly and struck up conversation. But we had places to be and were just concerned about eating and beating it.

Our seats over looked the plain bar. The old walls and worn doors were well lit by the sun and the reflective waters of the Pitt River. Nothing stood out decor wise, and yet you felt as if nothing matched. It just looked like a living room in anyone’s home, with an island bar and booths. But with the large windows facing the water you weren’t really looking anywhere else. You focused on that view, and on first glimpse that was worth the drive out to no where.
We were surrounded by a pretty diverse and mellow crowd. All Caucasian, all middle aged, all in casual wear, and all having fun. We got settled into our seats just as the band arrived and started setting up. According to the staff they were good. We really didn’t get a chance to experience this before we were ready to leave. 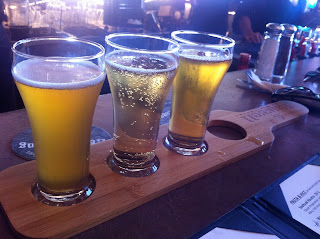 Seeing a beer taster get passed to another customer, I had to get one too. I always find them the best deal. You get to try 3-4 different beers for the price on one. Shame, that the version at “Kingfisher” only used 3 of the 4 cut out slots on the beer paddle. They called this their
Weekend summer beer flight. You got three tasters for $9. Your selection included the “Hoyner pilsner”, the “new grist gluten free” beer, and the “hay fever saison”. All light, one tangy, and you could tell which one was gluten free.

The menu was thorough with a fairly large selection from pastas to burgers. But nothing really jumped out as a must try. Also you don’t want to pay $20 plus for a dish you potentially won’t like, at a place where you don’t know how good the cooking is. We instead decided to share three safer appetizers. I think the best way to judge a bar is by how well they do the usual classics. Bar fare that is available at all other bars. In this we felt that “Kingfisher” had its hits and a few misses. 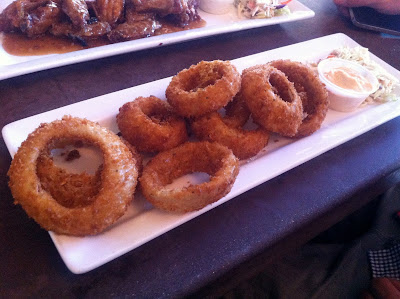 Hand breaded onion rings. Buttermilk herb marinated, beer battered onion rings, with red pepper aioli dipping sauce. Each “O” had a crispy texture. But the batter did nothing to give it an individual taste. Shame, as I was expecting a better beer kick in my first bite. In my opinion the best onion rings are ones where you can’t taste the onion or feel its slimy texture. These had those classifications. And as long as you were heavy on the sauce you need not worry about lack of taste. 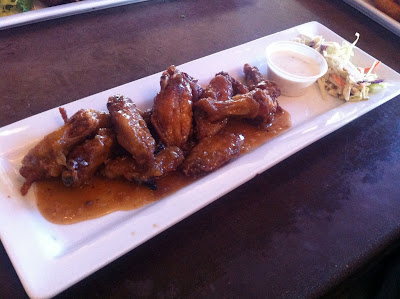 One pound of crispy wings in honey garlic. These were literally the smallest wings I have ever had. Their chickens must be on a diet to have such little meat on bone. Three pieces here were equivalent to one wing you can get at local your grocery store. The saving grace of this dish was how great the honey garlic sauce was. It was thick and sweet with strong garlic a pick me up. 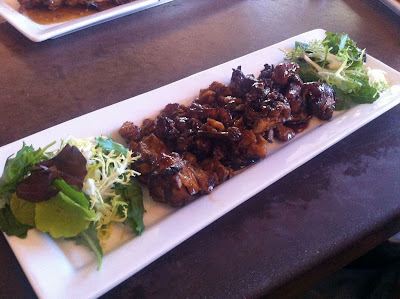 Braised pork ribs. Ginger soy marinated pork ribs, fried and tossed in hoisin sauce. Doesn’t look good but at least tasted it. We never tried anything like it. It had the flavours found at a North American BBQ competition but prepared with heavy Asian influences. Most of the pieces were fall of the bone tender. Though half way through the long plate, we realized one side was more tender than the other. 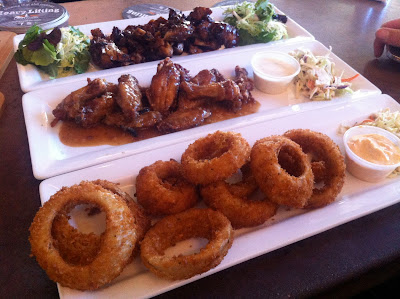 These plates were all great appetizer sizes for sharing. Each dish was under $10. The food was ok, but nothing note worthy.The sides that came with each plate was bland. And felt like it was only present for colour.

The later it got, the busier it got, and we lost service from all the staff. It was considered a Monday night at any bar in Vancouver, but here everyone was scurrying and staff kept their eyes down, lest they be hailed for help. An over crowded bar and forgotten requests warranted a small tip. At the end we gave up on packing our leftovers to go, and left un-noticed. This was after we made attempts to hail one of the two bartenders. After 15 minutes we got up to leave. It was only then did they turn to our direction, though only to check that the bill was paid in full. Not even a “goodbye” or “thank you”. They just wanted the seats for two locals waiting with the herd of others at the restaurant foyer.


Would I come back? – No.
Would I recommend it? – No.
The distance to travel is considered more than out of the way. The river was beautiful, but we didn’t get a chance to enjoy it. And with a wait time of an hour plus it was not worth the time spent. You could leave your name and come back, but there is nothing around to see, and you would only loose a hard sought out parking spot. The food was only alright with both strong and weak points in each dish. Definitely nothing different or better than if we had ordered this else where. The staff were unfocused and seemed to buckle under pressure. So a trip out here for this is not worth your effort. But this was definitely the bees knees in the boonies.