A Little Jiggle in Lebanon ~ 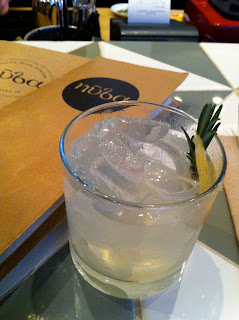 Arrived early at the “Nuba” located in Kitsalano. Took the opportunity to order a drink and jot down my first blush impressions as I waited for my guests to arrive. I walked in solo and didn’t have to wait for the hostess, as the bartender came out from behind his counter to greet me. He allowed me to take a reserved seat at the bar. I took his recommendation of trying the drink special of the day: “rosemary grapefruit gimlet”. He created light conversation and even took the time to explain what a “gimlet” was, truly great customer service from this young man. The gimlet was delightful with the light taste of gin, it cooled with the grapefruit and simultaneously heated the back of your throat with the ginger. I could have had many and would like more on their patio in summer. Eventually the group came to claim their reserved bar seats and I was ushered to my reserved table.

I didn’t mind the wait as the decor of this location was the nicest of the three I have been to. This use to be an old Greek restaurant. Towards the back of the building they kept the upstairs balcony and the indoor windows adorned with planters. Where we were seated it reminded me of an open court yard, especially with the vaulted glass ceiling. It is a shame they covered it up with a tarp. Hopefully when the weather is a lot nicer they will remove it and allow the sun to beam in, what a great dining experience that would make.

“Nuba” is the only Lebanon restaurant that I know of, so there isn’t really anything I could use to compare its quality and authenticity too. But based on its now four locations I would say they are doing well. The tiki themed one on Hastings at the Waldorf has closed down, but they still have their other locations at Yaletown, Gastown, and Main St. Lebanese food is known for being very healthy and there were very many vegetarian and vegan options available on their menu; perfect for many stereotypical Vancouverites. Or as in my case a good restaurant option if you have vegetarian friends in your party; and want a place that has meat dishes for you and more then just salad for them. 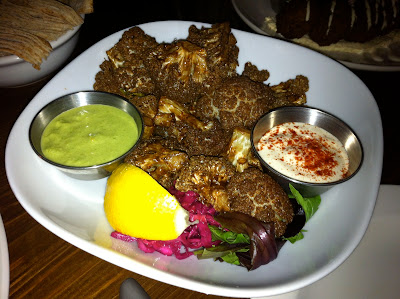 We started off with veggie friendly appies. They are known for their “Najib’s Special”, which was on Vancouver magazine’s 101 things to try 2009 and the reason I tried “Nuba” for the first time 4 years ago. The crispy cauliflower is tossed with lemon and sea salt and served with a side of tahini. This was as good as I remembered. Crispy and well seasoned. If all children were given a plate of this there will never be parents complaining that they can’t get their kids to eat vegetables. Delicious, a must order option whenever you come.

The “Garden Falafel” was nothing special. To me falafel is falafel. One way to make it and only one outcome. Chewy in the centre and crispy around the edges. The menu describes it as, “Victor’s secret recipe of organic chickpeas, fava beans, veggies and spices with hummus and avacado.” Though if you layer on all the sauces, the side of pickled beets and avacado with the falafel it did become an exciting bite. 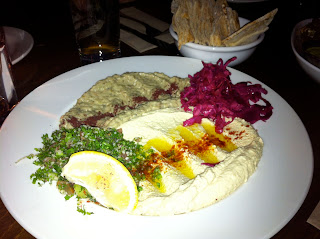 The “Le Petit Feast” is a plate of hummus, taboulleh, baba ghanooj, and homemade pickles with a side of bottomless pita bread slices to share. The spreads were nothing you couldn’t get a pail of at “No Frills” grocery store for $6. And the pitas were probably bought in bulk and warmed in the microwave. Nothing really worth paying for that you couldn’t assemble yourself. The same house made pickles that were also on our other sides were what really saved this dish. Even though the pitas were bottomless it would have been nicer to get more than what you needed instead of having to rely on your server to come by your table with a refill.
For our entrees a server brought out our plates, but had to ask other tables before ours if they ordered “these”. Unprofessional of a server to not know what table they are heading to, what each dish was, and who ordered what. Even if they were helping at another section, she should at least read the table number and dishes from the order. If I was a bigger germ-a-phobe: can you imagine the contamination of her speaking over your dish, then bringing it close to the faces of other customers to see if its what they had ordered; all the spit and skin cells falling onto your plate. At least she volunteered to bring us more pita when we were wondering if we should ask for more and if we would be charged for it. 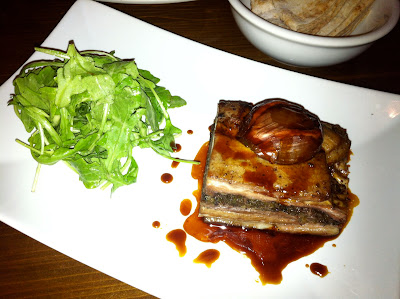 I had the “Lamb Belly”. When in doubt always get the lamb; it is delicious because it is one of the fattier cuts of meat, and it is something you will not ordinarily make for yourself at home. This was slow cooked lamb belly in sumac, parsley and garlic with a side of arugula salad coated in shallot dressing. The menu also mentioned that cherry tomatoes would be part of this plate, but alas I was disappointed to have none. The lamb belly was thick and layered like a cake made with fat, meat, and seasonings. Cutting into it was a challenge as the fate was so thick and rubbery that it jiggled. The taste was so rich that I couldn’t eat bite after bite. I needed the arugula salad to take away from the rich fatty taste and add a crispier texture to each of my bites. And when that stopped working I had to cleanse my pallet with hummus and pita after every bite of lamb. Eventually I had to cut away the fat and didn’t have much more to eat. Luckily I was already full from the lentils in our appies. I would not order this again and did not feel it was worth the $12 I paid for it. At least presentation was top notch. 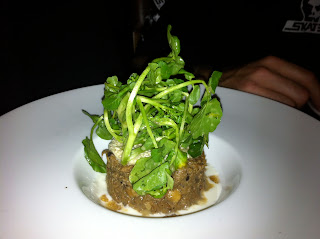 Yakhne“; braised pulled lamb, hazelnut, toum sauce, pastry, watercress, and pickled mustard seed. My guest claimed this dish was too fancy for him. Despite him saying the taste was more complex then he is use to, he ate his plate clean along with the watercress he didn’t originally know what to do with. Like my lamb belly, you really needed the side veggies to help break up the heavy taste of the lamb meat. The pastry also helped to neutralize the salt from the lamb.

Would I go back? Yes. It is so hard to find good places to eat that offers meat dishes and enough vegetarian ones to keep your veggie friends happy. “Nuba” does a good job. I just wouldn’t order the lamb again. I feel “Nuba” specializes in vegetarian dishes and meat is an afterthought for them.
Would I recommend it? – Yes, especially this location. Good unique flavours, vegan friendly dining experience, a beautiful restaurant in an equally beautiful neighborhood, and live entertainment on selected day. Tonight was belly dancing. I got a sneak peak of the ladies in the washroom before they jiggled and shook on the floor. First the juniors and the seniors, literally. I just wished they travelled around the restaurant floor instead of just blocking up the entrance way.
NUBA
3116 West Broadway, Vancouver BC
604-336-1797
nuba.ca