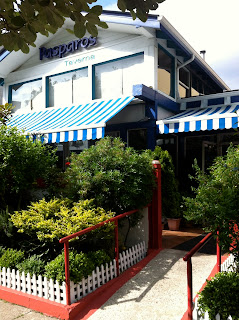 Today we chased the sun out of Burnaby, all the way to North Vancouver. It led us to an area near Longsdale Quay, and here we began our hunt for something to eat. We sought out Greek for an early dinner. We drove past a house with over grown plants, and a stripped blue and white awning; before we even saw the name we knew we had found our place. We pulled to the side and easily got a spot along the street, out front of “Pasparos Taverna”.

We originally contemplated sitting on the patio, to take advantage of the day. Unfortunately it was not set up; and the crow guarding the space did not seem friendly or the type to share.

As we entered the staff stood waiting for business. We were first in for dinner at 5pm on a Saturday, and all hands were on deck ready to serve. The chefs in white leaned against the bar that fronted their open kitchen. The owner, Katia stood proudly at the forefront of her restaurant. She directed the waiters in prep before their dinner rush. 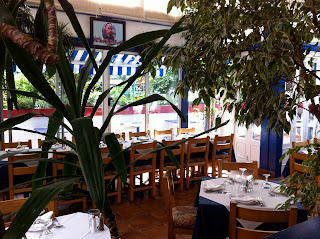 We were given the best seats in the house. In a window box, at a table for two, over looking the lower floor. The entire restaurant was basically an old house with an expansion, that was heated by an industrial grade heat lamp. “Pasparos” had one of the most traditional Greek layout I have ever enjoyed. Overflowing with an abundance of blue and white, from the table cloths to the wall trims and and post. The place with alive with living plants that cascaded down walls and crept up corners. The sounds of water trickling down a stone waterfall display created a calming environment. The sun shone through large widows and skylights. And fans kept the space cool. Beautifully painted canvases accurately depicted Greco buildings. White domes and arches, setting suns, and yellow blossoming flowers in front of rich blue skies and calming waters. With their larger tables,their divided rooms, and all their open space this is a great restaurant for larger parties. And the city defiantly knew, after we were seated a party of 12 grabbed the table upfront.

The owner and Chef Katia, is your typical older Greek woman. Loud and plump, she was not a woman to trifle with. She cooed and caa-ed over her loyal customers, and was not above serving tables and seating patrons. She lead her team of young male servers with great directness. You could tell she was a main reason locals came back. She greeted familiar faces as, “darling”. And gave the place personality, and a certain pizzaz only a big character could.

The menu listed all the familiar Greek classics, as well as a section for Katia’s own specialities. Each entree comes with the usual Greek accompaniments: Greek salad, rice pilaf, roasted potatoes, and tzatziki sauce. Expect here there were no pita to dip your sauce into. But they were generous with the feta cheese. And you got more than one piece of roasted potato, which gave you a great meat to potato ratio. The rice was well seasoned but had no extra veggies in it, it was just flavoured yellow rice. Each entree is more expensive than your usual Greek dinner found else where. $20 compared to the more commonly seen $16.95. Unique dishes aside, I don’t really see any increase in value parallel to the increase in price. 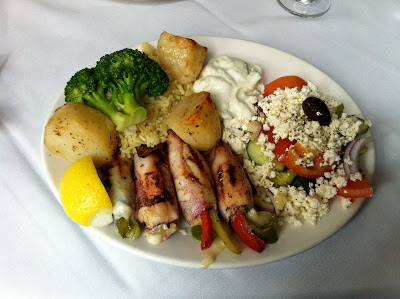 The stuffed calamari entree came as nothing I had expected. When you read calamari you think breaded and deep fried bites. But in reality what showed up was four miniature cuttlefish stuffed in the head with feta, kefalograviera, celery, zucchini, and green and red peppers. The addition of feta and cheese made each bite of the “squid” too salty. I literally had to destuff them to enjoy my plate. 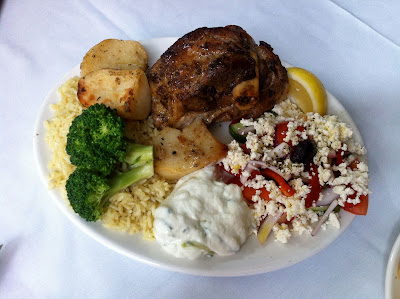 Slow roasted lamb shoulder in an authentic blend of spices. The lamb was fall off the bone delicious. Plenty of meat. 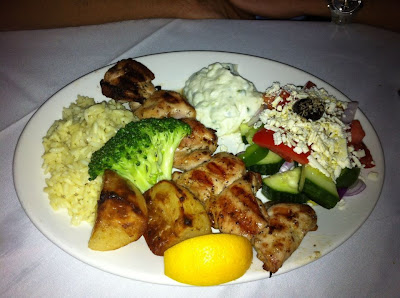 The chicken souvlaki is made from boneless chicken thigh. It was done wonderfully: plentiful, tender and juicy. 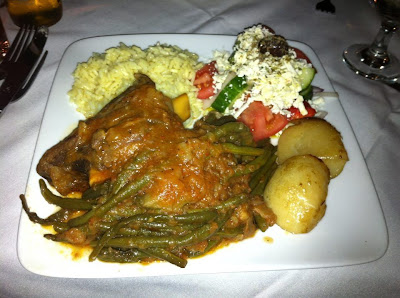 A Kaita’s special, roasted lamb shank and green beans in a tomato sauce. It had a deliciously unique taste that I cannot put my finger on. Each piece of the lamb was succulent, and was easily separated from the shank. The beans gave each bite a crunch factor. And the tomato sauce a light tangy quality.

Would I come back? – No. As great as the food was, for $3 more than at any other Greek place, without pita bread; I do not really see any value. Plus if you live further away, a drive to North Vancouver for Greek food may not be convenient.
Would I recommend it? Yes, if you live in North Van and are looking for a great neighborhood Greek place, this is the one. “Pasparos” is run by an owner who truly cares and takes the time to learn your name. You will enjoy the culturally rich decor and inviting staff. Don’t deny your cravings.