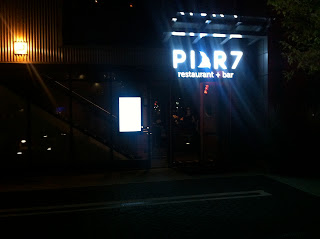 Trying to find a nice dinner location, outside downtown Vancouver’s core, we ended up at “Pier 7”. Our goal was to avoid the crowds on a Saturday night, and the traffic from the last night of fireworks. Lonsdale Quay gave us a nice dinner with a better view. Walking towards “Pier 7” for our late meal, we were delighted and surprised to get a view of the fireworks across the water. And a free out door concert across the way. The concert was presented by Shaw and City TV, the first of a three part set, of a local concert series. 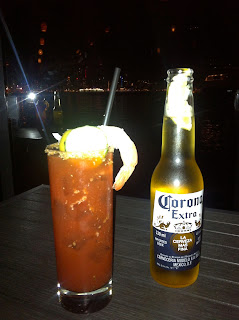 We called ahead to confirm a slower night and a later opening. But not warned of the limited menu after 10pm. Though the expectation is you are coming in only for drinks and desserts at this time. With a milder night we asked to be seated on the heat lamp warmed patio. With blankets gathered by tables for those who need it. It wasn’t available now, but for their busier times an upper floor and patio could be opened for seating as well. We were given the corner table, the best seat in the house. We felt water from the waves splashing against dock, saw lights flickering from downtown Vancouver in the distance, and heard the motors from smaller boats coming in for the night. Though thanks to the 20 million dollar boat stationed by the dock, we weren’t able to watch the end of the symphony of fire. We sat on waterproof tables and chairs. You always sacrifice comfort for view on patios. I found the seats uncomfortable as they dug into my bare thighs.

The menu included share plates, salads, sandwiches, and mains. Though we were only allowed to choose from their appetizers. It felt a little odd to not have seafood when at a restaurant by the water; but I came with a guest that ironically chose the place, and doesn’t like the cuisine. Luckily there are always non seafood options available on every menu. And out of the 4, these are our 2 choices, after the sliders was opted out on our behalf. 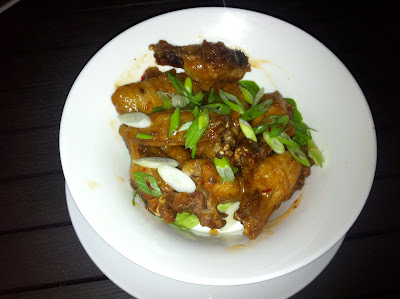 “Vietnamese Spiced Chicken Wings”, with lemongrass and a sweet chili sauce. These wings were full of meat with a seasoning that we were not use to, but tasted great none the less. Though because of all the sauce that pooled at the bottom, it became too salty to eat without a rub down. I thought this was delicious, but they gave my guest indigestion. 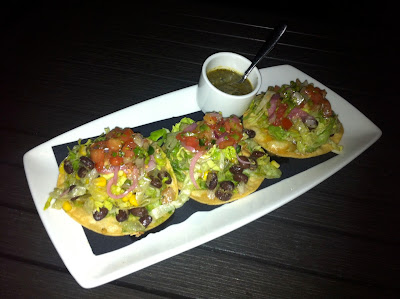 “Pulled Chicken Tostadas” with lime and chili braised chicken, crisp lettuce, red onion, guacamole, corn, and black bean salsa. It tasted fresh and authentic like Mexican cuisine. Even with all its many flavours from its many ingredients, they all melded together in delicious harmony. And if all that taste isn’t enough for you, the order comes with a green tomatillo salsa as well. It added a more sour taste to each crisp bite. They looked good, but the napkins under the nacho chip like discs quickly became soggy and torn by my usage of utensils. And try as I may, it was impossible to bite into each tostada without having it break a part in your palm. At every point I wish I had a spoon, it would have made eating easier than balancing high stacked bits on the blade of a butter knife. 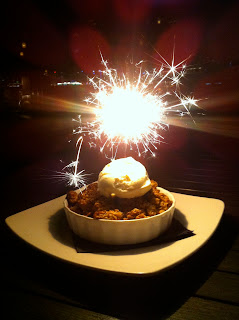 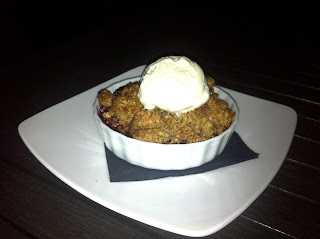 “Seasonal fruit crumble”, with blueberries, blackberries, and raspberries. It was topped with a sparkler when asked for a birthday flare. The smell hit you as soon as it landed on the table, and it was amazing. It was best hot with the crumble at its crispiest. My guest was surprised over how much he liked this and the crumble especially. This means a lot coming from a man who doesn’t like fruits or healthier grains. The best bite was the first, the ice cream was still a little solid, the oats hot and crunchy, and the berries firm. And I know its part of the dessert, but there was too much oozing juice that eventually made everything soggy. More crumble would have easily rectify this. 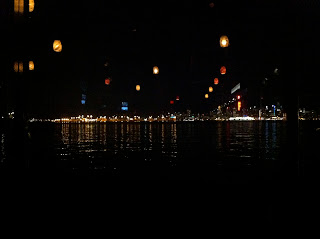 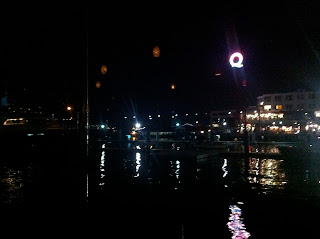 Our server lacked service. She listened but did not reply. How was I to know of she heard that I wanted a ceasar? And how am I to know if it was okay to keep a menu when I asked? She didn’t create inviting conversion, or did she look you in the face when you spoke. Though as cold as she was she did stop by our table to check in on us often. She didn’t interrupt our conversation, but did suss out the situation. In her defense she may just been tired from a busy night. The sun came out later in the day, it was a long weekend, there was a music festival across the way , fireworks across the water, and she is ending her shift working the floor alone.

Would I come back? – Yes. We would like to come back first thing in the morning. Our table was the optimal seat to watch the sun rise from the East. Also I can’t a good gage of the food, based on two pretty good appetizers and an excellent dessert.
Would I recommend it? – Yes. The view is amazingly stunning at night, and I am sure mesmerizing in the morning. All the food is well known and well loved American classics, done with comfortable twists. The menu is a safe guarantee to appease most eating preferences. And with lots of seats, the wait for a table shouldn’t be too long. And waiting isn’t so bad when you get to enjoy it with a view like this. Don’t deny your cravings.