Went to “Sura” in the Korean district of downtown Vancouver. It was full at 8pm with people sitting inside and even more waiting outside, good thing we had reservations  Half our group was running late. Trying to find any roadside, meter parking downtown on a Friday night is no easy feat. As the rest of us waited, the waitress nudged us several times to order, you could definitely feel the push out the door.

The interior of “Sura” is large and newer than some of the other Korean restaurants on the block. The tables in the centre were separated by curtains that flowed from the ceiling. They were used to create individual seating rooms, and did well to maximize the space. Our table was right against the front window. I didn’t really mind it, and it was not that cold with my back against the glass; but I could have only imagine the uncomfortable sight of my flat ass pushed up against the window for potential customers walking by. Not exactly the best store front imagine in my opinion.

On top of each wooden table was a tea light placed into a small measuring cup. Amanda commented that it seems like they just opened their kitchen drawer and decided to use them because they had 16 laying around. I did not understand their theme on this. The walls were not over done trying to be authentic. One showcased their 3 Vancouver Magazine food awards and the other had a list of Top 10 orders . I found the Top 10 list useful in order to see what would be recommendation as a “popular”dish, but truthfully it was easy to decide what you wanted solely with the menu. The menu had pictures of each dish on the opposite page of the numbered orders. (I think every menu should have pictures of all their dishes, this entices you to want to order them.) The selection was large and varied from noodles and rice to stews and dumplings. The one oddities was the $3 add on, “Saam, deliciously refreshing green and red leaf lettuce”, its corresponding picture was a wine glass with radish slices on the bottom and lettuce leaves out the top. I feel this would be a perfect treat if you brought your pet bunny along. And doesn’t a head of lettuce go for $1? Needless to say I did not order this. 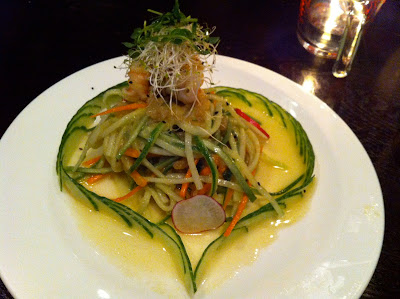 We all decided to order our own dishes, instead of sharing small plates style as the restaurant recommended. But in the end we did try and taste from one another’s plates. Nhu and I got the “Jellyfish salad, mouth-watering salad with thinly sliced jellyfish, cucumber, and shrimp omelette tossed in a tangy mustard dressing. It was good, but truthfully I ordered this to be able to take a nice picture of it,. In the menu  I saw it had thin slices of cucumbers onlining  the rest of the salad, together they created a heart shape. And I am a sucker for a pretty food picture opportunity, The taste reminded me of an upgraded Japanese sunomono salad with the cold, lemony, light taste that refreshed you from all the spicy food you had before it. For it being a jellyfish salad, it did not have nearly enough jellyfish for a taste in every bite. Every strand was thin and wispy and not close to the intense flavour of the cold ones you can get from most Chinese restaurants. I liked the shrimp that was also present , but would prefer having more jelly fish in place of it. 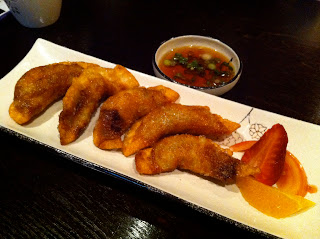 Along with complimentary small plates of kimchi, cold seasoned egg plant and bbq beans, the girls ordered some deep fried dumplings. Based on the irregular shape of each one I am going to conclude that it was hand made prior and then deep fried to order. Very crispy bites that tasted fresh and not frozen. 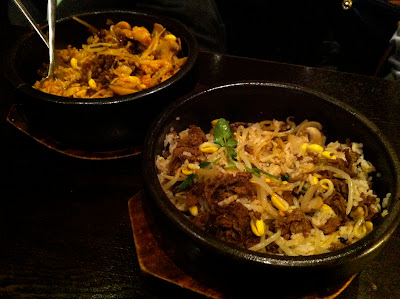 Patricia and Jennifer ordered “Dolsot Bibim-bap”, which is beef and lightly sautéed vegetables with a raw egg on top, all in a heated stone bowl. The staff traditionally mix it at your table in front of your eyes. With two girl and two bowls, it was clear that one was better than the other.  The pro feverishly tossed the rice around without spilling, her colleague was having trouble, mixing slowly and with none of  same gusto. The stone bowl is hot enough to cook the egg when you toss everything together. Patricia got her bowl with extra sweet chilli sauce, which proved to be a good idea as Jennifer found hers bland and tasteless. So much so that she put some hot sauce in hers, even though she does not like the heat. Nhu’s rice bowl, “Bulgogi Bibim-bap”, despite it being made with bbq beef was no more tastier than Jennifer’s. She was given the option of not having it mixed by the servers and therefore we were able to take a before picture of it all pretty. All three girls with their rice bowls in the end had to scoop out sauce from Amanda’s “Squid Bulgogi, sautéed squid with spicy house special sauce and vegetables in a hot pot”, in order to get any satisfaction from eating theirs. The squid and beef stew came to our table bubbling, and despite Amanda asking for mild, it was still very spicy. But just enough spice to kick start some flavour in the bland rice dishes. Based on how it saved 3 other dishes I deemed Amanda’s stone bowl the best dish that came to the table that night. 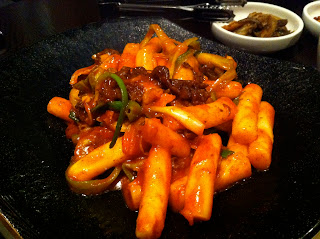 Elina and I played it safe with dishes we knew we would like. Hers was the “Beef Ricecakes” and mine the “Japchae, stir-fried savoury potato noodles in sweet sesame oil with beef and mixed vegetables”,  both are a common sight in Korean cuisine. And both I would say were as expected. It was good, but nothing about it stood out enough to blow your mind or put it in the fore front of all the other variations out there. 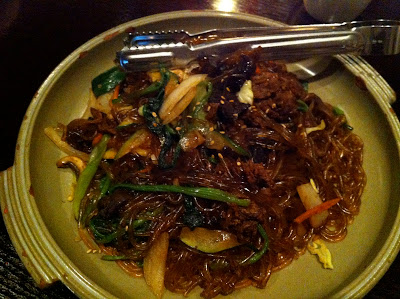 At the end it came out to be lots of extra food, uneaten. The bigger portions were a good value at the reasonable prices, most plates were $13-16.

The young male waiter was not shy about asking to give us the bill. I believe he was joking, but each interaction with him came across as blunt and hinged on rude. I think based on our similar age range he felt he could casually joke around. We were a party of 6 so an automatic 15% gratis charge was added on.
Would I come back ? –  Yes, seeing as this was my second time here.
Would I recommend it? –  No, cause my party only deemed it as being fair.
According to the menu, “Sura” means, “king’s meal” in Korean. I sure did not feel like I was eating anything worthy of a king, maybe these were his unwanted leftovers?