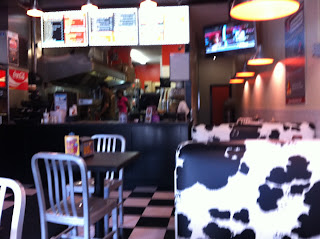 I usually don’t like writing about fast food places or chains, it feels too common, as if it has already been done. But I got mixed reviews from coworkers about “Vera’s Burger Shack” so I decided to try for myself and see if their food is as their slogan suggests: “You can’t beat Vera’s meat!”  I was craving a juicy burger that I knew McDonald’s could not satisfy. You get what you pay for and I am willing to pay $8.49 over $4 for something better tasting and hopefully better for me. I walked into the location on Broadway and Granville at 5pm. The shop was empty and the fake cow hide seats were the first thing that jumped out. They were a bit tacky but matched the black and white checkered floor and black table tops well. At least they are consistent with their colour theme. I guess the choice of the cow print was intended to emphasis their brand and image of selling quality beef. If you don’t want regular beef patties, they also serve other burgers like lamb, turkey, chicken or organic beef. And if you decided to go to a burger place not wanting a burger (why???) You could order a hot dog or a chili dog. According to their signage their hot dog weiners are made especially for “Vera’s Burgers”. 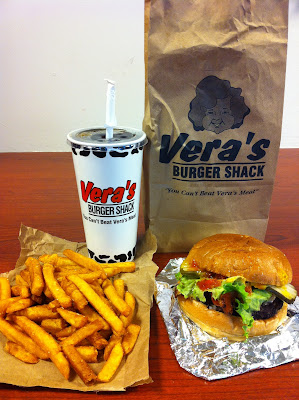 I immediately was greeted by a happy young girl behind the cash desk. She was in training and clearly liking her new job. I told her this was my first time here and that I will need time to look over the menu. She immediately asked if I liked bacon (what meat eater doesn’t?) and suggested I order the special for Monday: “The Canuck Burger”. It is a bacon cheese burger with  fries and a drink combo for $11.47. I only wanted the burger but got the combo in order to take this more complete picture. To combo anything is $3.99. So I only really only saved $1.09 for getting Monday’s combo. But that is how they get you to up size, the promise of a deal.

Everything is all made to order, so even though “Vera’s” is considered fast food it did take time to cook the patty and deep fry the frozen french fries. I was seated in a booth waiting and was pleasantly surprised that the girl who was helping me earlier brought my take out to me as soon as it was done. Majority of the other fast food establishments would just shout from the front that it was ready, and I would have to go up to retrieve it. This really impressed me as a customer.
I got it all to go. By the time I got back to my office to unwrap it for pictures, the sauces in my burger had pooled to the bottom and was dripping out the aluminum coloured wrapping.
I do not remember the best burger I have ever had, But this was not it. It was as I expected: thick and better seasoned then anything I could have gotten from a “Burger King” or “Wendy’s”. But I did not get that juicy burger bite that I truly craved. I wanted more

umph from my first bite. Their take out menu says their burgers are made to order and therefore a little pink in the middle. Mine was 100% fully cooked (as ground beef burgers should be) but to the point it was dry and the edges chunky and chewy.
I got all the condiments possible, which ‘Vera’s” calls “The Works”. I was excited and impressed over all the options available: jalapenos, BBQ sauce, pickles, mayo, two kinds of mustard, their special house sauce, etc;. So with everything but the kitchen sink, my burger was not lacking in flavour.
The fries were of a thicker cut and not just seasoned with salt. It is as good as they were ever going to be out of a frozen bag. Comparatively to other fast food joints they were a cut above the rest. 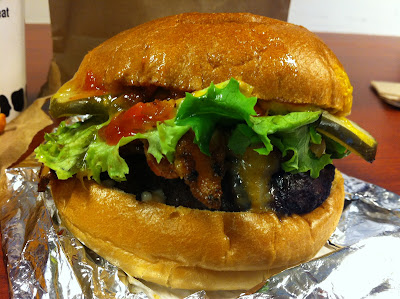 After i devoured my burger and handed my fries to my coworker, I felt sick. It may have been because I ate too quickly or because of all the grease in my meal. If this has happened to you after eating fast food, it is because they have not removed all the grease from the stoves. This made me wonder. When was the last time they cleaned out the grease trap from their stoves? When you have franchises like this, you tend to think are all the standards for quality and cleanliness really being looked after?

Would I go back? Yes, it was delicious and it satisfied my hunger for a slightly better burger. And I would also like to try their other meat products.
Would I recommend it? No, there is no consistency of quality from location to location. And they exaggerate the descriptions of their food. Their house sauce was not so good that I wanted to drink it. Their burgers were 6 oz but not cooked pink. And there are many other burgers out there that does beat Vera’s meat. But if you want something easy and are in the area it is satisfying and should always be your choice over all the other restaurants with mascots.