My guest tonight is a fussy eater, no vegetables, no seafood, and nothing weird was the directions I was given. They were to be used in guiding me to choose a place. My choices are limited. I knew he liked chicken, but I wasn’t feeling churches or the Kentucky variety. A google search led us down Robson to try Korea’s take on fried chicken, “Zabu Chicken”. What sets their chicken apart is its buttermilk batter, its soy base, and its sticky sweet honey garlic flavour. This is the base flavour for each of your chicken choices, but by adding specific spices they mix it up and create more options to order from. Spicy hot sauce makes it the “Zabu Hot”. Puffed crisp rice gives you the signature “soy sal-sal chicken”. Citrus juices makes it “lemon chicken”. And a hint if cinnamon gives you the “yang nyum chicken”. 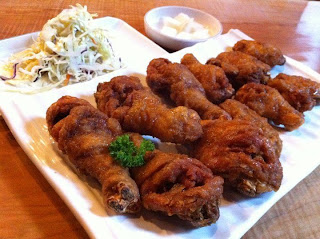 We played it safe and got the regular soy based chicken, the whole order. The suggested amount for two people. You can get a whole rotisserie chicken for under $8. So for over $20 we were expecting a lot more than they delivered.
They also offer other selections at other prices, for different sizes and for different amounts. Where it gets fuzzy is there is no consistency in their classification of a portion. How are they determining the sizing? What is the difference between a medium or larger portion compared to 6, 12, or 18 pieces or 5 and 10? Asking the service staff did nothing for clarification. With all their hand gestures and the consultations with one another, nothing was made clearer. 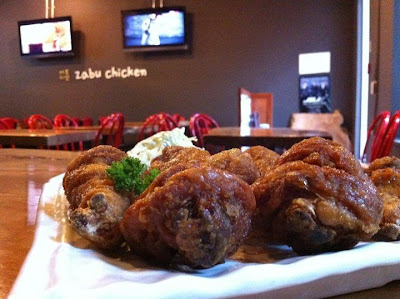 You are able to choose from a drum or wing, or a mix of both. No other fried chicken place allows the picking of parts at no extra cost. I liked how they called their all drum plates “Zabu sticks”. Initially I thought they were bread sticks, by name alone. But it is sides you want, you have slim pickings. Your choices: pickles, steamed rice, a chicken or garden salad, and coleslaw. Clearly you come in for the fried chicken.

As for the restaurant’s environment, if you want authenticity you have it. Korean pop music playing over head, and Korean boy bands dancing on television screens, and Korean customers sitting and conversing in their native tongue. The servers communicate right back in the same fashion too.

As for the chicken itself, I found nothing special in our bowl of mixed leg parts. The skin was crispy as promised, but the combinations of seasonings was nothing I haven’t tried. Ultimately it comes down to the fact that I feel I did not come near to close to getting my money’s worth.
In fact we didn’t leave any more satisfied or any less hungry. Though we did walk away with indigestion. And for those reasons I would neither come back or recommend this restaurant.