The conversation came up: would you find a sushi place that hired caucasian servers or non Japanese chefs authentic? By law you cannot discriminate by race. Who is to say a French man who has trained with the best Japanese chefs in Japan, can’t adequately roll a nigiri? Though there is that preconceived notion that it cannot be real Italian food if the owner and chef is Greek. Not really a ramen place if it is run by a family from China. We never did end our debate, but this train of thought eventually led me to ask my only Japanese friend which Japanese restaurant he finds the best in Vancouver. Ironically he is allergic to seafood. I always joke that, that is why he came to Canada: he got kicked out for not being able to eat anything there. 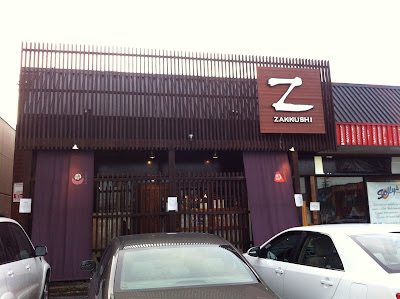 “Zakkushi, Japanese Charcoal Grill Izakaya” had his full recommendation. I went to one on Main because he said it was the best. They have two sister locations: one Downtown Vancouver on Deman and the other on West 4th. It was hard to find the place by sign alone. It is a plain dark building on corner of Main and King Edward, hidden behind the large RBC. The front is not decorated and only after comments from customers, did they added a sign with their name to the store front. There are only three parking spots for customers in front. I didn’t even bother seeing if one was free and ended up parking a block a way. Was able to find free parking, but metered spots are around the area as well. 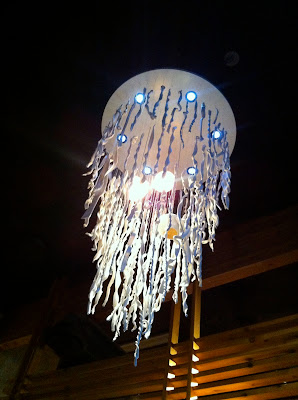 The entrance of “Zakkushi” is not very inviting. The door is blocked off by a dark wooden gate and you need to walk around to the right in order to get a chance to lug open the heavy door. But once inside, similar to numerous other Japanese restaurants, you get a loud traditional Japanese greeting from all the staff front and back of house. The restaurant is a small space and seating is maximized with majority of its booths being able to only fit 2 to 4 bodies. We were seated in what I would call their party room. Where larger groups could move smaller tables together. It was nice because at the time we were seated, it was a quite space for two girls to catch up. I appreciated the hostess asking us if the one table was enough. I explained that I planned to order various plates and she quickly made our single table into a double.
The space filled up quickly, good thing we made reservations the night before. I was a little put off when I was told that if we were later then 15 minutes our table would be given away. Though this did get us here on time, and they are popular enough that all their seating is valuable.

There was no clutter on the walls, the only art hung from the ceiling as lighting fixtures. A large chandler made with white paper hung above our table. It reminded me of a jellyfish. The other smaller lights were wrapped in what looked like banana peels and partially peeled orange rinds – unique to say the least.

“Zakkushi” is tapas style eating, a style that has been on the rise as of late. Eating is more enjoyable when you can sample a variety of smaller offerings and order more of what you like. It is also great in big groups accompanied by drinks, and they had a few creative ones like “pink beer”. Their menu was spectacular. As a customer it is great to see what you will get before ordering it. And I order 70% based on how it will look in a picture and the rest on how I think it will taste.We ordered 10 plates and it came to under $70 after taxes. Considering the quality of everything ordered this was an amazing value.

I came in knowing I had to try the “tuskune”, grilled rice ball and the nigiri sushi as recommend by my Japanese friend. And these and he did not disappoint. In fact they were three of the best  dishes we enjoyed that night. 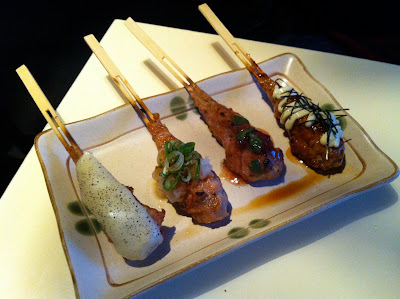 “Tuskune” is meat ball wrapped around a two pronged stick as apposed to being rounded into a ball. This was one of their trademark dishes. It came in five different flavours: teriyaki and sea salt; cheese and pepper; shredded daikon with ponzu sauce; sweet plum sauce; and seaweed with Japanese sweet mayo. We tried the last four. The meat was moist and each sauce transformed each stick into something completely unique from the other. One tasted sour, the other sweet, there was savory and then creamy. A wonderful way to reinvent the meatball. 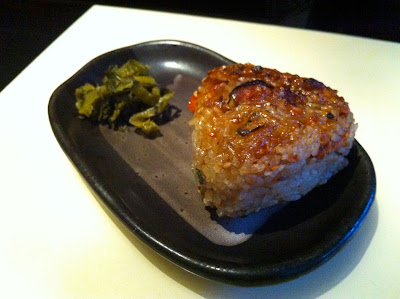 “Yakioni” are grilled rice ball, it came in Shoyu or Miso. As per the waitress’ suggestion we got the special that was stuffed with “salmon, baby fish, sesame, and soy butter”. Be sure to eat this as soon as it hits your table. Inside is warm and chewy and the outer grilled layer is crispy. You get a real great taste of everything in each bite. 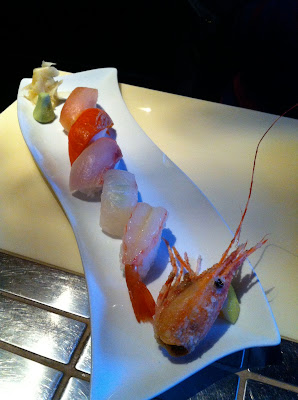 I am not the biggest fan of raw fish, the texture and the taste is usually not appealing to me, but I am so happy I tried their nigiri. This is the best raw fish I have ever had. It was fresh, tender and had a subtle light taste to it. The rice was equally soft. Together so good that soya sauce was not needed. Thanks to the nigiri at “Zakkushi” I have concluded that I do like raw fish, and have just been put off by the poor quality ones I have had in the past from cheap all you can eat places. 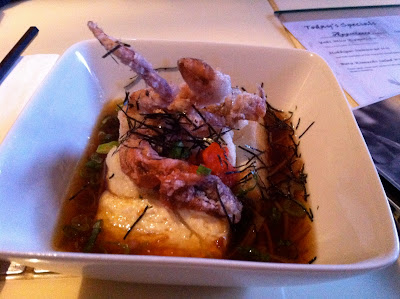 “Kani Agedashi Tofu, deep fried tofu and soft shelled crab and wafu dashi sauce”. Most Agedashi tofu dishes are usually sweeter, this one had a rich savory flavour that I really enjoyed. The sauce was thick and gel-like, it gave everything a smooth texture. The soft shell crab would have been better not coated in tempura batter, but still delicious as it was served. The syrup like sauce was the winning ingredient that bonded all these components together. It was so good that I saved some to use as a dipping sauce with the rest of my meal. 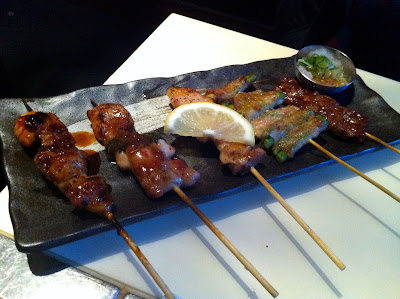 “Zakkushi Sampler”. Five different skewers of pork, beef, chicken, asparagus, and lamb. A little dry. Great but nothing new I haven’t tried. This was definitely a popular menu item as both tables surrounding us ordered many rounds of them. It was great that you could order one stick at a time if you desired, no minimum of order of any one variety was imposed. 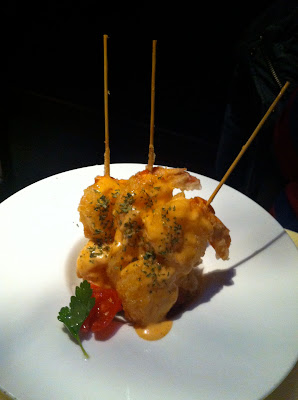 “Ebimayo”, 6 deep fried shrimp on skewers coated in their creamy orange house sauce. One of the more tastier versions I have ever had. Each shrimp was left in its natural curl as apposed to being stretched out. 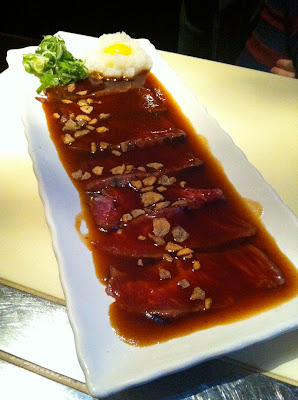 “Beef Tataki”, thinly sliced pieces of raw beef, generously coated in a sweet and spicy sauce. This was recommended by or polite waitress. It came with a side of green onion and raw quail egg over crushed daikon. The best way to eat these was rolled up and down in one bite. The garlic chips gave the entire dish a wonderful zesty quality. This one was my favourite. 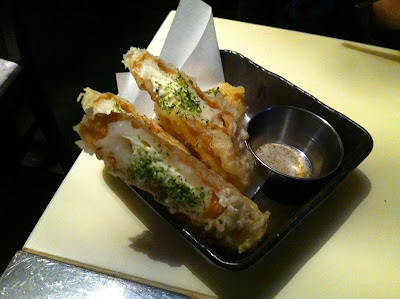 Deep fried fish cake stuffed with cream cheese was one of their specials. I always say you cannot go wrong with cream cheese. The heat from the fired batter turned the cream cheese in the middle into a liquid. The side seasonings were a much needed component to every bite, as the taste did not pop without it. A completely one of a kind dish that I ate more then half of. 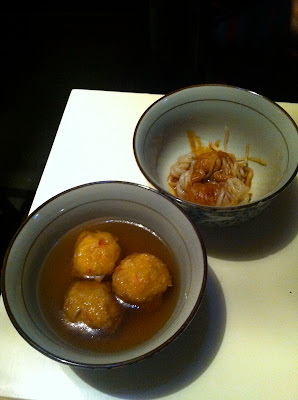 We got the knotted noodle in miso sauce and lobster balls in broth as part of the chef’s choice. This really wasn’t anything great compared to the rest. Though would be amazing in hot pot and if we ordered its other accompaniments.

Only until our meal’s end did we figure out the use of the small hollow wood container that sat at every table. They are a vessel to store all your used Skewer in. I wondered how often did these get actually get cleaned out.

Would I got back? Absolutely, so many more menu options I have yet to put in my mouth. They had sushi rolls that I wanted to try too, but for my first time I wanted to get all that they were known for first.
Would I recommend it? Yes, Yes and Yes. Hands down this is the best authentic Japanese restaurant I have ever been too. My friend was right. Every dish was fantastic, no complaints. The staff were plentiful and polite. My tea was always topped off and never allowed to cool. A must try for everyone regardless of what you like. Just an all around fantastic establishment. The only reason we finally left after 2.5 hours is that the table next to us kept growing in numbers and eventually there was far too much testosterone for our estrogen based conversations.